Solving Christmas and Thanksgiving: How to get liberals and conservatives in your family to empathize with one another
_____________________
1) This probably won’t work, but give it a shot.
_____________________
2) If you’re the Conservative: Liberals have emotions related to liberty and care. Or fairness. They don’t care about groupish stuff like loyalty, authority, sanctity, and purity. So in order to make them understand you, you have to reframe the stuff you care about in terms of either care, or liberty. More lefty types are Care above all things (lots of agreeableness).

Start with a big rectangle (see second comment) and another one smaller under it.
Show them the future part and the far future part of the rectangle. On the part close to present, write the name of some poor countries and minorities or whatever they currently care about. Then tell them: You care about all these people being safe, and unharmed, and heard, and loved. And paint the present and next 20 years part of the graph green.

Then ask if they also care about these other people not being harmed and being cared for, and point to the far future and 100 parts of the big rectangle. They’ll say ‘yes’ though they know you’re tricking them somehow.

Ok so if you care about them, and there’s only so many resources we must give some resources to them, by investing in the future. 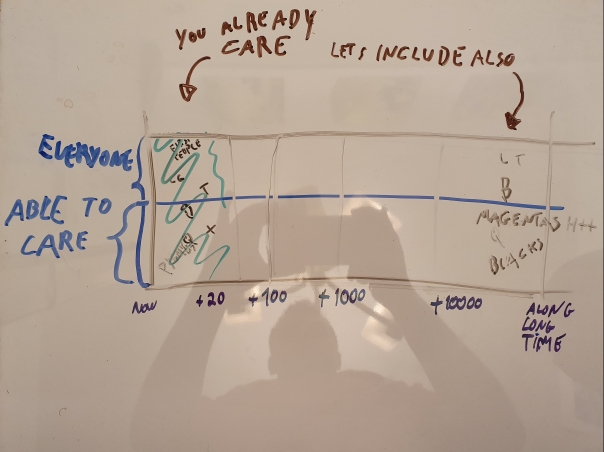 Then explain to them that historically, the groups that cared more for themselves or people that treated them nicely fared a little better than those who didn’t. Those who followed authority and order and ranking and hierarchy won wars while the others lost, and those who were more pious or religious behaved in ways less costly to the justice system. So, over loong, loong periods of time, people became a little more ingroup loyal, more begrugingly accepting of authority, and more religious.

Then pull them in a bit by saying “conservatives are less smart than liberals” that will give them a chance to exhale and feel ok, and lubricate them for the information that follows.

Also disease is and was very prevalent for most of history, so we evolved high disgust sensitivity, which is why authoritarian leaders are often germaphobes. As recently as a century ago, a third of the population of Europe was decimated. While this happened, ideas about religion and ideas about purity of the body got conflated into one big corpus of information, which was so big that conservatives were too stupid to be able to memorize. So instead of memorizing it, they just have these super strong intuition about what is sacred and profane, beautiful or disgusting, attractive or repelling etc… and these are basically ways to make sure that in the future, the small rectangle, the rectangle of people who still care for other people and want to take care of them, is still there. This happens in two ways, the religion and authority create a filtering system for memes so that memes that are destructive viruses either brought by other populations or that evolved spontaneously in the group get filtered out. So people retain their ability to care for others and have lots of babies who will care for others and not let other people who care less for others invade their cities and kill them, which would make the small rectangle small and make lots of people go without care, love, and safety.

The values conservatives think they have – you continue to explain – are actually just compressed files of caring for the future people that they unconsciously have imprinted in their lizard brains. In all populations some of the intelligence is inside an individual skull and some of it is in the group, like a beehive. Those things that conservatives consider sacred values, which they won’t let go of but also can’t explain why they care about are just that. People who only did things they could fully understand instead of deffering to traditions, customs and religious rituals, absurd as they may seem, failed to take care of the big future rectangle, and now all the people still around have an annoying religious granma or aunt or cousin or brother. They are just expressing a lower level intelligence that protects everyone around you and makes the people of the future cared for.

So, you the conservative, tell your liberal friends that conservatives are stupid, but “stupid” is actually another name of “intelligent and caring in a way they themselves can grasp but that helped us all be here today and thankful”. Ultimately, conservatives care about people in an even larger moral circle than liberals, but they have no idea they do and think instead that being pious, righteous, deferring to authority, sanctimous and often disgusted by things that seem perfectly fine to you is the moral way of being and the right thing to do. They are a lower form of intelligence, but without their type of intelligence, the other type that tries to figure it out on its own and that cares for harm, fairness directly cannot actually succeed. If it could, all these weird values conservatives flaunt would have disappeared and we would all be left liberals or leftists enjoying our little piece of paradise. So don’t try to understand conservatives, they don’t understand themselves much. Instead empathize with them being the soldier ants protecting you and the future people, the future minorities, the future unprivileged. And also making sure that people who care will still exist in large numbers a long time from now. That’s why they like babies so much and lie about abortion being murder. It’s because they have this true intuition that somehow if you don’t lie about abortion, sacred motherhood, and a few other sacred things, then no one will care, and no one will be around to be cared for.
______________________________
3) If you’re the Liberal: Show your annoying uncle the graph below with how the moral foundations for politics are organized, and tell him that you understand why conservatives believe what they believe and feel what they feel. Don’t just say it, show it. 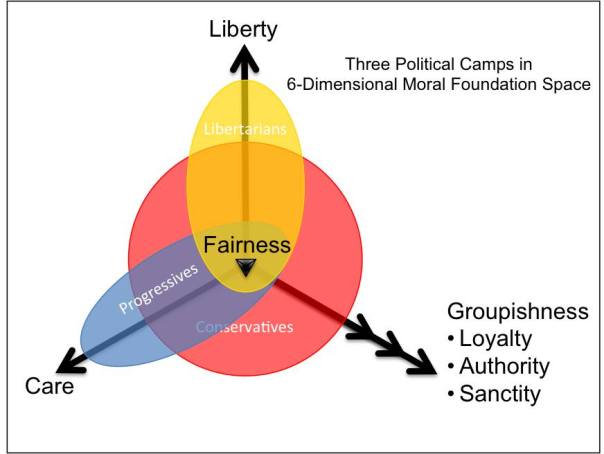 Tell him liberals are morally inferior because we only care about 1 (lefty) or 2 (left libertarian) moral foundations, and show his distinct and clear moral superiority because he has a six dimensional moral system whereas you only have a 2 dimensional. Now that his ego is appropriately stroked, explain to him that evolution is a slow process and there always needs to be a small contingent of our genes doing exploration. Every mutation that became reality was once just a mutation that seemed like a degeneration, a degenerate if you will, but the environment had changed enough that it was good now. Evolution, biological and cultural is always playing catch with reality. This happens to genes (and you can tell your uncle that’s why northern European Christians became smarter and prettier than everyone else during the dark ages, they might have seemed dark on the outside, but they were definitely moving towards the light and god on the inside, on the mythocondrial inside, and on the inside of the cells – he will fell very proud of his ancestors, so say “you can feel proud of your ancestors!” and he’ll have an automatic sensory meridian response {ASMR}, they experimented to go where no genome had gone before and conquered the niche of awesome)

This process though has two “catches”
The first catch is that at any given time, not only the genes need to be experimenting (though not every gene at once) but also at higher levels like people and groups a minority has to be always trying to erh dodge the rules a bit…

Emphasize the word MAN when you read this quote

Then tell him that the reason White Cis Het Patriarchal European MAN conquered the world culturally was due to a population high variance in TESTOSTERONE and ANDROGENS which give MANLY MAN-ness to their beautiful, lustrous, masculine bodies, and the effect of this injection of glorious MANhood into their bodies is that a minority of people, not just DNA, were degenerates, strangers, thinkers and philosophers, sluts and partygoers, STUDs and mutants were always a minority who permitted themselves a life different from the Church and Country’s dictums who tried often to calculate if the moral foundations of conservatives were no longer tracking the things they are supposed to track.

Now here’s the important part, proclaim this: This is the reason Europeans were superior in battle, in geniuses, and in technology to Orientals (he’ll get a kick of you using a politically incorrect word, trust me). The reason why our God given constitutionis happens here, whereas communism hppened to the Chinese is that they lacked the creative spirit, the MASCULINE HERO minority of mutants which, despite producing all the annoying protesters and mobsters you don’t like, also produces these VALIANT and BRAVE WARRIORs who change the fundamental and strenghten our nation, blood, and soil, against our enemies in the east, the barbarians in the south, and the disgusting people who live two blocks down. As East Asia proves, if you have a feminized non religious population no amount of average intelligence will suffice to compete with the West’s glorious cohort of degenerates, geniuses, weirdos, brilliant and sloppy thinkers that come from this high variance, MASCULINE long and wide girthed tail distribution. The minority of degenerate weirdosare a small price to pay for the Thunderous Glory of our Hajnal Geniuses drawn from the same highly selective and pure gene pool.

So you have to understand that we liberals are the manifestation, the epiphenomenon of the West’s glorious brilliantism and masculinity. It comes as a package, but it allows us to HUNT and TRACK DOWN reality real close and continuously Zero-in on an accurate if not precise technological advancement to carry on civilization and our values for our grandchildren, drawing forever closer to a heavenly state of purity. We sacrifice order now so that we can have a more orderly future. That is our responsibility as liberals and through bearing this our moral inferiority burden we too can glimpse at a meaninful eternity.